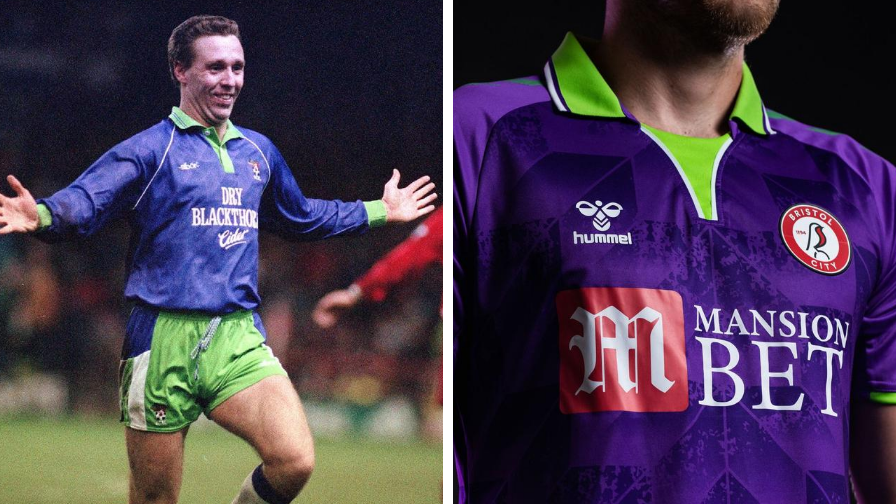 After a rigorous (or was it vigorous?) recruitment process, Bristol City finally announced Dean Holden as their new Head Coach. To suggest that Holden’s appointment is a polarising one would be an understatement, and akin to concluding that Brexit provoked ‘a bit of debate’.

Thankfully, the unveiling of City’s new away kit – modelled somewhat incredulously by new singing Joe Williams- wasn’t greeted with a glut of toxic vitriol online, however one does question the decision of going back to purple and lime once again.

In fairness to Hummel, City’s new kit supplier have produced a tidy away strip. And I’m also a fan of the purple and lime livery. In fact, when City made their 2014/15 third kit available for pre-order, I ended up buying the whole bloody lot! I will add the caveat that I had consumed a few ciders at the time of the order, and subsequently spared everyone I know the embarrassment of being seen with me in public donned out in ‘full-kit wanker’ regalia, but the truth remains that I did get caught up in the excitement.

And who can blame me? I was so enthralled by nostalgia – after all, the whole point of resurrecting the purple and lime colours was to mark the twenty-year anniversary of that victory against Liverpool in the FA Cup – that I felt that the 14/15 kit was an essential purchase. And I was so overwhelmingly enthused by City doing something different with their choice of kit, that I was an instant advocate of the decision to shun the big-name manufacturers in favour of making them internally.

Tinnion in the original purple and lime strip of ’94.

As one would imagine, the 14/15 kit sold like hot cakes (I prefer a flan…) And as the City coffers swelled, Bristol Sport sensed an opportunity. The proverbial ‘If it ain’t broke, don’t fix it’ mentality was adopted, and prior to the latest offering, we’ve seen the purple and lime return twice, to mixed receptions, since the reintroduction six years ago.

The 2017/18 version was deservedly voted the EFL’s kit of the season, and during a recent ‘lockdown pub-night’ Zoom call, I put that shirt forward as my all-time favourite football top I own (shout to out to England’s ‘Tailored by Umbro’ 2010 home shirt, albeit worn in an underwhelming World Cup campaign, as that one was right up there).

In 2018/19, City went back to the well again with principal sponsor Dunder adorned across the front of the shirt; in retrospect, I think ‘blunder’ would have been more apt. It’s possible that I’m in the minority here, but I thought it was an absolute shocker. Whenever I require a ‘tactical chunder’ on a night out, I just Google search an image of that shirt, and I’m soon ready for another round of Jägerbombs! (Different drinks, for different…needs)

And so here we are on the eve of a new season and the purple and lime is trotted out once more, but it could be worse. And I am thankful that we haven’t been subjected to another ‘copy and paste’ template job, like we were for the 2016/17 campaign; at times I had to squint to realise weren’t actually wearing Bristol Rugby’s away kit by accident.

And I’m equally thankful that we haven’t been given another inverted home strip, like the one which was rolled out for the 2010-11 season. When replica shirt prices are already a point of contention for supporters (especially for those parents buying them for their merch-thirsty kids, who have been whipped into a frenzy by ‘FOMO’ marketing) you want to reward their undying loyalty/custom with something distinctive in comparison to the traditional red and white.

However, City could have opted for black – the 2007/08 away kit was another favourite of mine – even though we did have that last year, or perhaps they could have gone in a different direction and chosen a darkish green, in a similar vein to the one sported in 2000-01, or attempted another canary yellow concept similar to the 1998/99 away shirt? As alluded to previously, Hummel have done a decent job with their first set of new City kits.

The new home Goalkeeper kit looks good too. Whilst the away ‘keeper kit is a bit more ‘out there’, I can certainly foresee it selling a decent amount in the club shop next term – providing fans can actually get in there, of course.

Which leads me back to the purple and lime. Again, I can see this one selling very well, and I don’t dislike the kit per se. But it does feel a bit like overkill, which only diminishes the prestige of these iconic City colours. It’s a bit like food; you can have too much of a good thing, and as much as I like steak, I wouldn’t want to eat it every day (Actually, I probably could, but you get my point!)

Maybe I asked for too much. Maybe I had unrealistic expectations. Maybe once I’ve had time to calm down, I’ll invest into it and be happy, just so long as the football is good, and the results are acceptable. It just lacks any imagination and feels terribly underwhelming right now. Wait a minute, that sounds awfully familiar doesn’t it? Oh well.